The beginning of the new school year is always one of the most fun times of year: wide-eyed, cheery, overwhelmed hordes of young people arrive on campuses around the world and proceed to get in the way of everyone trying to get anywhere on time.

The new school year for Chinese university students kicked off earlier this month, and banners went up around campus welcoming the new students. Pop-up stalls selling every type of plastic household item imaginable appeared all around in parking lots and along walkways. The window in my office faces one of the main squares of the university campus; from my desk, I had a full view of the new student orientation activities that were about to commence.

At universities in the United States, new student orientation is a time of brightly-colored t-shirts and RAs chanting and screaming until they are hoarse. I remember my own freshman orientation very clearly: Before I had even arrived at my dorm, my RAs were waiting outside screaming my name — they were apparently able to identify me from covertly tracking me down on Facebook — to welcome me to the dorm. I was then informed that my dorm was the best dorm of all time, and that no other dorm could say the same. Over the next week, new student orientation proceeded with an unimaginable number of embarrassing icebreakers and time to learn our respective “dorm chants” about why our dorm was, in fact, superior. Then we were treated to a series of seminars about the dangers of alcohol and sex, soon followed by consumption of alcohol and time for flirting.

The first things that stand out are the sounds: the blaring of patriotic Chinese music, the coordinated stomping of feet, the gruff barking of Chinese military officers. Then the sights: the stiff backs, the swinging arms to and fro, and, of course, the familiar neon pink new student orientation t-shirts emblazoned with “2014.” The chants and slogans are there, but they are not about dorms but national patriotism. 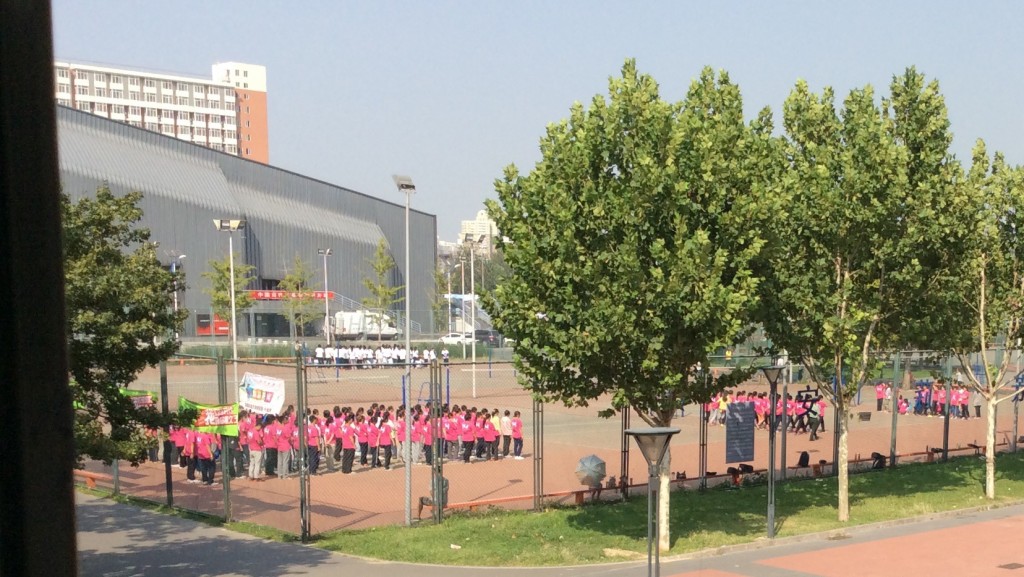 A very poor photograph of a very interesting sight.

All incoming university students, regardless of their future endeavors, are required to participate in this military training. High school students participate in similar training at the beginning of the school years as well, although as of yet no word on what color t-shirts they have to wear. National defense education extends down to primary and junior high school as well, although not through full military training. According to the law, national defense education should be part of “related curricula” with potential for incorporation into extracurricular activities.

As these are not future military officers, the goal is not to train students for actual military altercations, as most students probably do not march in unison to attend class. Instead, there are four established aims: promote patriotism, help develop good personal character, shape collectivism, and benefit later learning.

In its current form, the training appears to be mostly focused on instilling discipline. The students have to stand outside all day in the late summer heat, retracing the same steps over and over.

As journalist David Logan wrote last year in The Diplomat, “The goal most commonly cited by both trainers and trainees was the cultivation of self-discipline. The same discipline required to weather early morning drill formations, so the logic goes, will also help students succeed in the classroom and cope with their newfound independence.”

Perhaps unsurprisingly, many Chinese students seem to regard this new student orientation as a nuisance rather than a particularly effective means of disciplinary training. Some students have suggested to me that it is mostly an exercise in standing outside in the heat all day rather than anything actually related to patriotism or the Chinese military. Others have suggested it is an exercise in conformity — forcing everyone to march together in exact unison is perhaps an attempt to “shape collectivism,” as proponents describe it.

The combination of heat, goose-stepping, and hordes of teenagers, of course, has its detractors. This year has been particularly contentious, as a number of incidents have occurred during training. According to the New York Times, five students in Wuhan, one of China’s notoriously hot cities, fainted in the first 20 minutes of training. In Hunan province, more than 40 people were injured after a scuffle broke out during a high school military drill.

There is no way to determine whether this military training helps improve discipline or effectively promotes conformity and collectively-oriented thinking among students. At the end of the day, as with many interactions between individuals and the State here in China, most students appear to grudgingly accept the requirements. Then, as soon as the school year starts, they probably forget everything and anything related to the previous week’s activities.

In this respect, of course, it is similar to new student orientation in the United States.